I traveled to Nicaragua to participate in a medical mission in January 2018. I joined Raleigh Hand Center colleague Dr. George Edwards, III and his wife Rebecca, a general orthopedic surgeon Dr. Jessica Hirschhorn, surgical technologist Roby Smith, and members of the not-for-profit organization COAN. We volunteered at the Hospital Escuela Oscar Danilo Rosales Arguello (HEODRA hospital), a 400 bed teaching hospital in the heart of Leon, Nicaragua. HEODRA hospital trains approximately 70% of Nicaraguan doctors, and it is one of the largest public hospitals in the country. 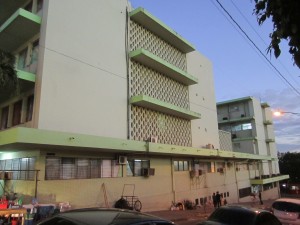 COAN (Cooperacion Ortopedica Americano Nicaraguense) was founded in 2002 with the goals to improve healthcare in Nicaragua and develop self-sufficiency among Nicaraguan physicians and surgeons. There is an emphasis on teaching residents-in-training at the hospital, who will one day graduate and work in various parts of their country. By visiting the hospital up to four times per year, COAN volunteers are able to build relationships with local orthopedists and provide support for ongoing patient care. Because of this model, this volunteer work has the potential to be sustainable and far-reaching in the country. The mission of COAN is to “change the healthcare of a nation by people helping people.”

Nicaragua is a developing country in central America and home to over six million people. Nicaragua is one of the poorest countries in the Western hemisphere. The people have endured decades of hardship with natural disasters including volcano eruptions, earthquakes, hurricanes, and well as political unrest and civil war. Resources are limited in the country, and many patients live without medical treatment of their ailments for many months or years. 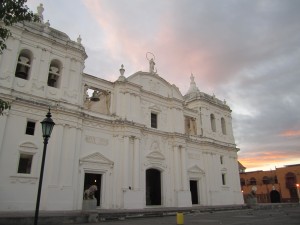 During our week, we evaluated approximately fifty patients in the outpatient clinic. The patients had a variety of conditions ranging from common problems such as anterior cruciate ligament (ACL) tears, osteoarthritis, ganglion cysts, trigger fingers, and carpal tunnel syndrome to more complex problems such as elbow fracture-dislocations, radius fracture nonunions, flexion contractures of the wrist, and nerve lacerations. Non-operative patients were treated with splints, braces, therapy, and corticosteroid injections. We selected over twenty patients for surgical treatment during our week. We were not able to help every patient we saw, as some conditions were beyond the scope of our practice. However, we developed a plan for follow up and treatment by another physician. 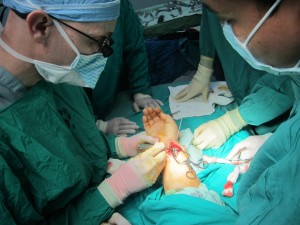 Additionally we evaluated patients who were admitted to the orthopedic ward through the emergency room. Motor vehicle collisions, especially motorcycle crashes, are common in Nicaragua and were a significant source of musculoskeletal trauma in the HEODRA hospital. Residents were busy taking care of these patients throughout the day and night. Beds on the orthopedic ward were in short supply, and patients typically shared a room with eight or nine other patients including visiting family members. Air conditioning was not available in many areas of the hospital. Open windows and hopefully an afternoon breeze helped to cool the patient wards.

Prior to surgery each day, our group participated in orthopedic conferences with the attending physicians and residents. We talked about wound healing techniques with negative pressure wound therapy, emergency treatment of hand conditions, snake bite injuries, and osteoporotic wrist fractures. I enjoyed the discussion which followed each lecture, as we collaborated with one another as colleagues. I was open to new ideas and learning various ways to treat our patients.

There were several lessons that I took away from my visit to Nicaragua. First of all, Nicaraguan orthopedists treat many conditions conservatively, whereas in the 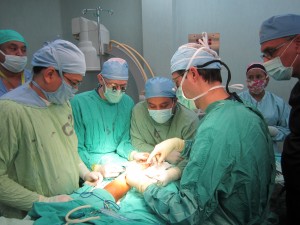 United States, surgery would be more common. This is due in part to the limited resources, but could also be related to differences in surgeon training and standard practices. Additionally, several orthopedic implants commonly used in the United States were not available at HEODRA hospital. Instead of selecting from an assortment of sterile hardware, screws and specifically-designed plates, the surgeons cut screws to length and bend plates to fit the case. In fact, most of the surgical equipment was cleaned and reused for future cases, without an observable increase in surgical site infections. The local surgeons were very mindful of the limited resources and were able to take care of complex orthopedic conditions with the equipment they had at hand. For example, intra-operative x-ray, or fluoroscopy, was not accessible in many cases. The residents and attending physicians were skilled at working without fluoroscopy for most fracture care. After spending a week in Nicaragua, I gained new appreciation for the abundance of resources we often take for granted in the United States.

I also recognized the resiliency of the Nicaraguan people. Patients seemed to have strong faith and family support. Post-operative patients received only anti-inflammatory medications such as ibuprofen for pain. Patients appeared to tolerate the pain remarkably well, even after major surgery. In the United States, however, strong opioid pain killers are routinely prescribed for post-operative pain, and we are now seeing the downside to this practice with the opioid epidemic. 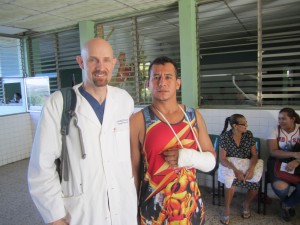 The people I met in Nicaragua were very friendly, hard working, and welcoming. I made friendships with the local surgeons and residents, and we shared interesting patient cases and life experiences as colleagues. Physicians opened their homes to our group and invited us to join them for meals with their families. The patients were very appreciative and expressed sincere gratitude for our efforts. In return, I received the satisfaction that I made a difference in the lives of people in need, and reaffirmed my decision to go to medical school. I hope to return to Nicaragua on future medical mission trips. — John M. Erickson, MD