Professional rock climber, and arguably one of the best rock climbers in the world, Tommy Caldwell, climbed the 3,000 foot vertical face of El Capitan in Yosemite National Park. He pioneered a new route to the top along the sheer, granite cliff, known at the Dawn Wall, which was previously thought to be an impossible climb. This ascent took 19 days, several years of preparation, and nerves of steel. He was accompanied only by his climbing equipment and fellow rock climber Kevin Jorgeson. If this does not seem difficult enough, Caldwell did this while missing a finger.

As detailed in his book, The Push, Caldwell describes the horrific accident, surgeries, and rehabilitation. He sustained a complete amputation of his left index finger while using a power saw during a woodworking project.  Initially the bleeding was controlled, his hand was bandaged and his amputated finger was placed in a plastic bag on ice. After arriving at the local medical facility, he was promptly transferred to a larger hospital with capabilities of finger reattachment, also called finger replantation. This task involves specialized hand surgery, several days of hospitalization for monitoring, and months of rehabilitation in order to be successful. The surgery requires expertise in microsurgery to repair the delicate arteries, veins, and nerves, orthopedic experience to repair the bone and tendons, and plastic surgery experience to manage skin and soft tissue defects. Caldwell underwent multiple surgeries to save the finger, but ultimately this was unsuccessful. His recovery was complicated by venous congestion, which occurs when there is not enough venous drainage to the finger. In other words, his finger had good blood inflow through the arteries, but not enough blood outflow through the veins. This causes the replanted finger to be engorged with dark, purple, venous blood, and this can result in failure of the replantation. Caldwell was monitored for several days in the hospital, treated with blood thinners, and even medicinal leeches; however the finger needed to be removed. Tommy Caldwell was understandably crushed by the entire situation, and he reports being in a mental haze during much of the hospitalization.

At some point during his recovery, Caldwell recalls that a physician advised him to take up a new sport since he would not be able to climb well with the loss of a finger. Apparently, this provided him with additional motivation to return to his sport. He was determined not only get back to where he was before the accident, but to become a better climber.

Caldwell performed extensive hand therapy including exercises to desensitize the amputation site, improve range of motion of the hand, and maximally strengthen the remaining fingers. Desensitization therapy involves specific exercises to reduce the pain at the amputation site. The cut nerve endings can be overly painful to touch, or hypersensitive, making the whole hand much harder to use. Range of motion exercise is critical because the hand becomes swollen and the fingers become very stiff after an injury. Strengthening exercises are important because immobilization and lack of use quickly lead to muscle atrophy and hand weakness.

Once he maximized his hand function, Caldwell then had to relearn how to use the hand for climbing without an index finger. Normally the index finger is used in precision pinch, fine motor tasks, and forceful gripping. For rock climbers, the index finger is specifically used during a “crimp” hand position when holding onto a thin edge of rock. The thumb is typically placed on top of the index finger for additional pulling power to support a large portion of the climber’s body weight.  I would imagine that for a professional rock climber learning to climb without an index finger would be like learning to walk again for most people. He said that this was very awkward. At first he would try to use the finger normally, only to realize it was no longer there. Eventually, with time and dedication, he was able to train his hand to work about as well as before the injury.

Tommy Caldwell’s story is a testament to the human spirit. He defied the odds, proved his doctor wrong, and accomplished a feat that had eluded elite climbers for years. As a physician, the lesson I take away from this story is to never underestimate the power of patient motivation. The best outcomes I have seen in my practice are in patients who are resilient and determined to get better. Of course, it is not easy to stay positive after a devastating traumatic event. It is normal to have doubt and fear, sometimes depression.  However, I think that optimism and perseverance are powerful and very helpful in the successful recovery from an injury. Tommy Caldwell’s achievement should be motivation for all of us to pursue our goals despite the obstacles in our way. 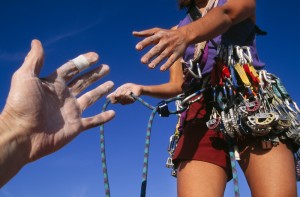